Our “When Animals Attack” theme was probably the most fun one we’ve had to date. So once again we’re gonna thrill you with animals hell-bent on revenge against humanity.

June 21st: Alligator (1980)
“Beneath these manholes, a man-eater is waiting.” Alligators are living in the Chicago sewers.

May is for Mothers, the kind that are sometimes aliens or werewolves or harboring dark secrets. Enjoy!

Serial Mom:
She’s a fabulous, loving, caring mother, who er… …happens to be a serial killer!

My Stepmother Is an Alien:
Starring Kim Basinger, Dan Ackroyd and also a young Alyson Hannigan and Seth Green
……

May 3rd: Serial Mom
May 10th: My Mom’s a Werewolf
May 17th: My Stepmother Is an Alien
May 24th: Mommie Dearest

Four movies featuring the best wingman a guy could ever hope for—Carl Weathers. 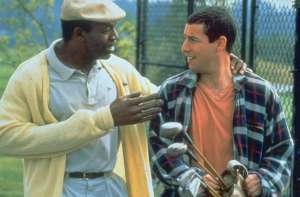 No picture of Carl, WTF

I’ve been excited about this theme for months. So here’s March:

March 1: Maximum Overdrive (1986) — Cars come alive and seek revenge. Based on a Steven King story.
March 8: The Car (1977) — A mysterious car terrorizes small town, and only James Brolin can fight back.
March 15: Killdozer! (1974) — Made for TV movie based on a Theodore Sturgeon short story. The one and only movie about a killer bulldozer.
March 22: Christine (1983) — Another Steven King-inspired masterpiece about a boy and his creepy relationship with his car.
March 29: Blood Car (2007) — Probably way too good for a potluck movie, but everyone should see it. Awesome satire-horror film about a vegan kindergarten teacher who invents a car that runs on human blood.

November is going to be a Ninja-tastic month. Scheduled movies subject to change.

October features a celebration of the achievements of Steve Guttenberg.

The main impetus for this month was our finding a VHS tape of “Can’t Stop the Music,” featuring The Gute alongside the Village People. It’s gonna be awesome.

Incredible Work Guys! You know who you are!

“Rodents of Unusual Size? I don’t think they really exist…”

for the final girl film club:

“Oh great brothers of the night, who rideth out upon the hot winds of hell, who dwelleth in the devil’s lair; move and appear!” -Anton Levay.

“Satan is my motorcar” – Cake

Oh NO, Oh God! Oh No Oh God…. “I wish i would have thought to pull over when i could before an evil-stalker car could run me off a cliff.” The Car opens with beautiful long shots of two kids cycling in Bryce Canyon, Utah. Coming up fast behind them in first person is The Car. Eventually they are quickly overtaken, rammed repeatedly and forced down a cliff by the menacing and mysterious black car.

The Car quickly takes out a hitchhiking hippy with a french horn, and later the old sheriff deputy.
The following day The Car makes an attempt on a parade. The marchers quickly scramble up a hill to the safety of a cemetary which apparently is a no-go zone for the Car. Lauren (Brolin’s love interest) decides its a good idea to insult the car with such clever quips as psycho-idiot-horse’s ass and Cat Poo! The marchers remain unscathed, but the Car enraged drives in frenzied circles and then takes out half of the sheriff’s department because Satan really hates cops. Oh and to not be out done The Car starts to stalk Lauren and eventually flys through her house because Satan holds petty grudges.

Enough is enough for Brolin, so the remaining sheriffs plan to trap the car and force it off a cliff and blow it up. In order for the plan to work they pull Amos, the curmudgeonly racist, wife-beating dude out of his jail cell to help them set dynamite charges. Here’s the interaction between Amos and Deputy Chas.

Chas: *has Amos by the collar
Amos: I’m a tax payer you savage – You’re choking me you damn Injun.
Chas: Sit um down! (in mocking Hollywood Native American voice)

Anyway, Brolin and Co get the job done. Satan is seen in a ball of fire as the Car takes a plunge down a cliff. woo hoo.

One: Dont taunt satan with silly insults or he’ll drive through your living room.
Two: Spousal abuse is fine as long as you give your dynamite to the police to fight Satan.
Three: Hippies with French Horns probably had it coming anyway.
Four: James Brolin has a sexy moustache

Just to let you know this movie rocks! everything you’d want in a 70’s thriller

I feel as if the people who made The Wraith were inspired by this film. The beautiful Southwestern scenery and the car chase seens, small town sheriffs and a mystery car and driver. No real tangible connection but there are a lot of things about this movie that could lead one to create a fine film like the Wraith. Thanks Final Girl, looking forward to the next film club.

For the past few weeks, we’ve all been basking in the glory that is Dr. Horrible’s Sing-Along Blog.  You know something has left a lasting impression when all of your housemates wake up with songs from the show stuck in their heads for WEEKS ON END.  NPH, Nathan Fillion and Felicia Day are awesome. So if you havent seen this yet, please do so immediately.

The fan forum is here: DoctorHorrible.Net.

House of 1000 Courses
Create a free website or blog at WordPress.com.