Incubus was almost not worth mentioning here, except to note that William Shatner actually is a pretty good actor when he’s speaking in a made-up language he doesn’t understand.

There was some speculation about whether or not Shatner did, in fact, speak Esperanto fluently, and a heroic internet search led Nate to a William Shatner fan forum, where he posted a query to the group. Within a day, he got back the following message:

He mentions it in his autobiography. Page 90. Haven’t you read it yet…?

He’d been invited to an Italian Film festival where they were screening Incubus. He watched it with Italian subtitles six months after making the film and couldn’t understand a word.

DUH Nate, if you had taken the time to read the fucking autobiography, you wouldn’t be wasting these people’s time with your silly questions. Noob.

For the past few weeks, we’ve all been basking in the glory that is Dr. Horrible’s Sing-Along Blog.  You know something has left a lasting impression when all of your housemates wake up with songs from the show stuck in their heads for WEEKS ON END.  NPH, Nathan Fillion and Felicia Day are awesome. So if you havent seen this yet, please do so immediately.

The fan forum is here: DoctorHorrible.Net. 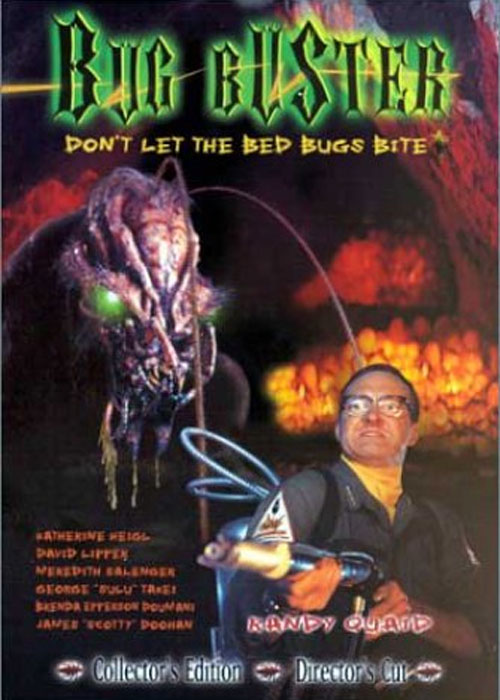 I’ve watched my fair share of movies about killer bugs. There’s The Swarm (1978), the movie that would be the one by which all subsequent killer bee movies would be judged. Slugs (1987) introduced me to the heretofore unknown species of vicious, fanged slugs. But 1998’s Bug Buster truly went where no killer bug movie had gone before.

Yeah…sorry. See, the only reason we watched this terrible, terrible movie was that it had not one, but two original Star Trek cast members: George Takei (Sulu) and James Doohan (Scotty). Takei, playing a near-senile Japanese entomologist, apparently was only available for a few hours of shooting, because all of his scenes take place in the same lab and without any other characters; the only interaction he has with anyone else in the movie is though a couple of phone calls. Doohan, on the other hand, has a moderate amount of screen time as Carlson, the sheriff of a small lakeside town. Whether drunk, sleepy, or suffering from early Alzheimer’s (which would later contribute to his death in 2005), Doohan stumbles through every scene he’s in, slurring his lines and often looking bored.

Here’s a run-down of the plot. Shannon (Katherine Heigl) and her parents (Anne Lockhart and Bernie Koppel) buy a hotel in the aforementioned small lakeside town. We learn that Shannon is afraid of bugs through a series of identical dream sequences (really — they just use the same footage three times) in which she is scantily clad and covered by large cockroaches. Strangely, while these are ostensibly nightmares, Shannon seems to rather enjoy the bugs’ crawling all over her naked flesh, arching her back erotically as the cockroaches crawl slowly up her thighs.

Right as they arrive in town, a local girl gets bitten by something while skinny-dipping in the lake, and Sheriff Carlson immediately closes off access to the lake. When it’s suggested that such an action might be a little hasty, he retorts, “You saw Jaws, didn’t you?” Naturally, nobody can argue with that logic, and the lake is shut down while the police investigate on a patrol boat. In one of the best scenes in the movie, a deputy falls in the lake and starts thrashing about, screaming that something is attacking him. The sheriff, of course, heroically shoots the fish with his handgun. Amazing. He then takes the fish to Laura, the town vet (and, apparently, the town forensic pathologist), and she finds a large cockroach in its stomach. 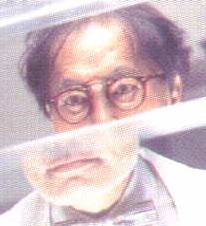 This strikes her as a bit odd, so she calls up Fujimoto (Takei), her old professor. (“Ah yes,” he says with a lecherous smile, “I remember. Pretty blonde.”) Fujimoto has to explain to Laura that “Blatella” is the Latin term for cockroaches, which makes a person wonder how on earth she passed his entomology class. No matter. Fujimoto plays with some terrible computer graphics of various insects, puts a cockroach in a tub of water, and fiddles with some scientific gadgets before ultimately meeting his fate. (It doesn’t really make sense. Let’s not worry about that part too much.)

Meanwhile, cockroaches are turning up in corpses all over town. The sax player for a band called “Trailer Park Trash” falls over dead in the middle of his set, a single cockroach crawling out of his beard.

Two bodies are found in a movie theater, their flesh eaten away by…centipedes, or so we’re led to believe. We’re treated to multiple shots of things crawling out of the lake at night, which could be centipedes but really look more like poorly animated straight lines.

Eventually, the girl who’d been bitten in the lake turns up again with some festering sores on her leg, which break open as cockroaches spill out of her body. All of this madness finally leads the vet/doctor/forensics expert to muse, “I can’t help wondering if there’s any connection between the roach I found in the fish and the ones I found in the humans.” By then, of course, it’s too late; roaches are everywhere, and the town is quarantined.

Shannon’s parents, while having some questionably enjoyable sex (noises heard from the room: “Oh! Oh! Wait, no….oh! Stop that!”), are apparently swarmed and eaten by bugs. (We only see their flesh-stripped corpses the next morning.) Things are not going well for our heroes.

The savior of this movie, both within the story narrative and for the viewers, is General George (Randy Quaid), an insane Vietnam-vet-turned-exterminator. Throughout the first three-quarters of the movie, we periodically see the general’s low-budget TV ads, in which he hacks a snake with a machete, uses a flamethrower on some spiders, and shoots a rat with a gun. The “pest eliminator” assures us that he “kicks bug ass,” and indeed, he is brought in at the end of the movie to deal with the mutant roaches.

Some quotes from the General:

“When General George opens up his can of whup-ass, there’ll be roaches in Siberia feeling the heat…”

“They [the roaches] appear to be amphibious…that means they can live in water and on dry land.”

In a mine shaft toward the end of the movie: “It’s a vampire bat: it’s bite’s deadlier than a king cobra…kill you like that…”

Truly, General George is a mind to be reckoned with.

We learn that there’s some sort of link between the giant bugs and some insecticides sprayed on the town a decade earlier. The sheriff turns out to be the bad guy, as he’s been in cahoots with the bugs the whole time, protecting their nest and their giant bug mama in order to drive property prices down so low that he can buy up the whole town. He shoots the love interest; giant bug mama slices his throat; General George blows up the whole mine and toasts the bug. Phew.

In summary, we get to see James Doohan shoot a fish and Randy Quaid fist-fight a giant insect puppet, which is pretty much worth the price of admission. Or at least the 99 cents I paid for this movie at the video store closeout sale.

There are so many zombie websites out there on the internet these days. At one time I was trying to compile a definitive guide to zombie culture on the web, but gave up after realizing just how long that was going to take me. Seriously, do you know how many “anti-zombie militias” there are out there? A lot.

At any rate, here’s one of them to check out: Lost Zombies, a website where you can upload your own photos, reports, and video of “zombie outbreaks” in your town.

…I’m pretty much done with this whole zombie craze. Five years ago, I warned another zombie-movie-loving friend that “zombies are becoming the new pirates,” and it seems to have come to pass. GODDAMMIT HIPSTERS YOU HAVE RUINED THIS FOR ME.